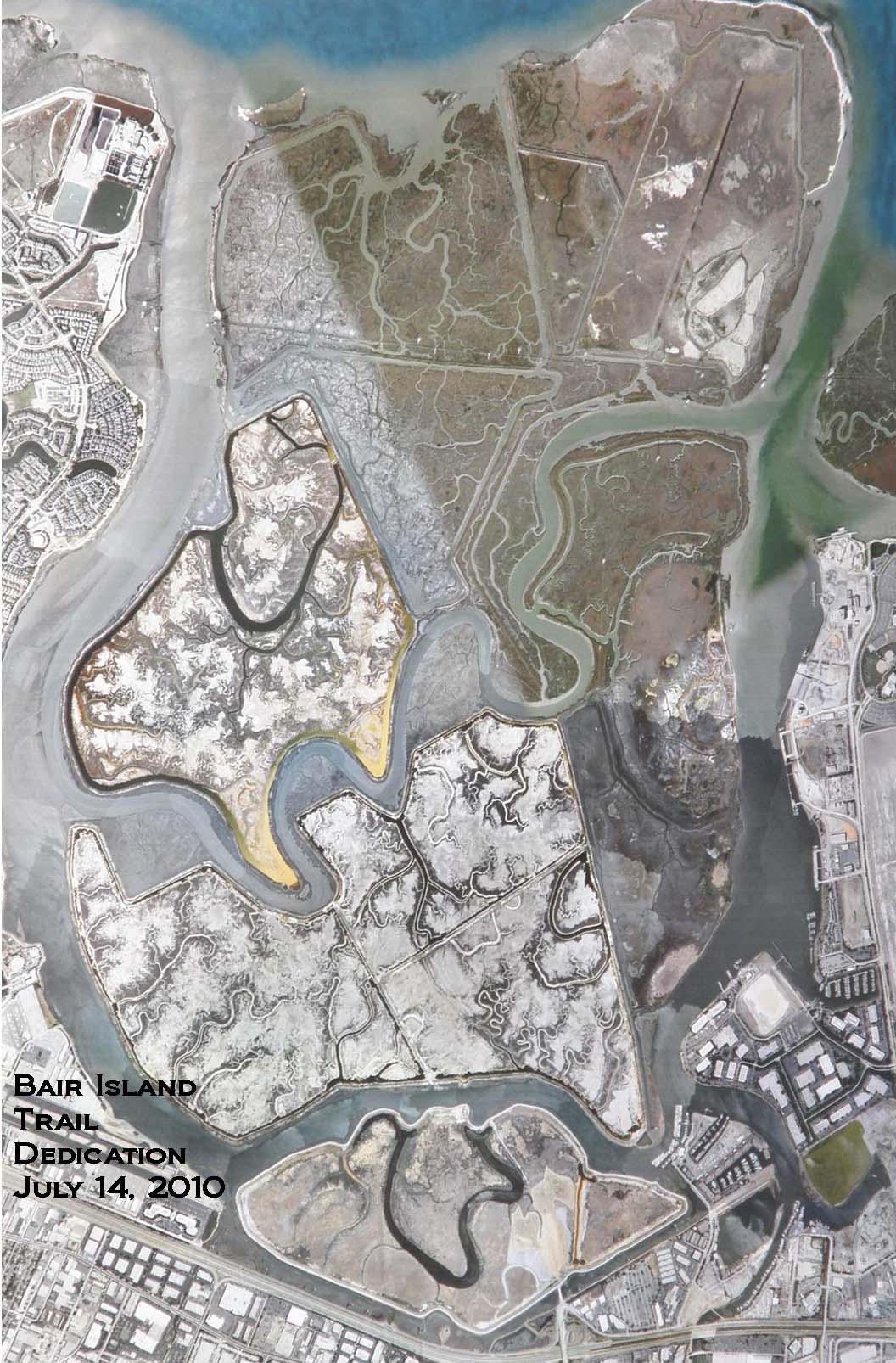 On a balmy day, last July 14, 2010, the levee trail on Inner Bair Island was dedicated in honor of Ralph Nobles and his late wife, Carolyn and the Friends of Redwood City.

In the fall of 1981 an immense development of Bair Island was approved by the Redwood City Council.  Ralph and Carolyn knew about the project, and knew that it would bring huge traffic jams to their city and would obliterate all existing wildlife habitat. They resolved to form a group to fight that ill-considered decision.

Mendel Stewart, Refuge Complex Manager, began the dedication ceremony by welcoming the crowd to this celebration of the preservation of Bair Island, providing an update on the restoration efforts that are underway, and asking us to join him in hearing the story of how these lands were saved retold.
At the dedication ceremony, Sandra Cooperman told the story of the newly-formed Friends of Redwood City:

When I think of how Bair Island became a national wildlife refuge I consider it a love story, a story about people with a burning passion in their hearts who wanted to save Bair Island from development. The historic start for creating what has become significant addition to the Don Edwards San Francisco Bay National Wildlife Refuge began in 1981 when Mobil Oil, owner of Bair Island, won the RWC Council’s approval to change zoning that would allow the development of a new city in the bay, replete with 20,000 homes, a shopping center and corporate offices. Concerned citizens who had attended the council meeting that night, visibly upset, gathered outside the chamber and declared that this was unthinkable. Ralph and Carolyn Nobles, who were in that small group, invited everyone to their home the following week to form a plan of action.

That very night the Friends of Redwood City (FORC) was born. We decided to challenge the council’s decision and signatures were easily gathered to force a city-wide vote. The council and others of power were highly annoyed by the effrontery of this first-ever citizens’ referendum, Measure O. Gathering enough signatures for the ballot was the easy part. We met weekly at the Nobles' planning our strategy. How could we best talk about traffic, endangered species, and a threat to health of the bay? We were just ordinary citizens fighting for an environmental cause. We had no money and no office, save the Nobles' living room, with Carolyn’s freshly baked cookies to keep us on focus each week.

The campaign was hard, but it had its light moments too. Mobil Oil rented a camel from Marine World and staked it out in the Baylands, with a big billboard calling the area a desert where nothing grew. Friends of Redwood City hired a crop-duster to fly over the Stanford Stadium during the Cal/Stanford game trailing a banner that read Yes on O. When the polls closed on Election Day in 1982 and the ballots were counted, FORC had lost by an extremely thin margin. The next day absentee ballots were counted, and in the end the Mobil plan was defeated by 42 votes. We never doubted the power of the people.  Of course, this was just the beginning of a long process, with many hands on board to make Bair Island a part of the refuge become a reality, and like all good love stories, this one had a very happy ending. 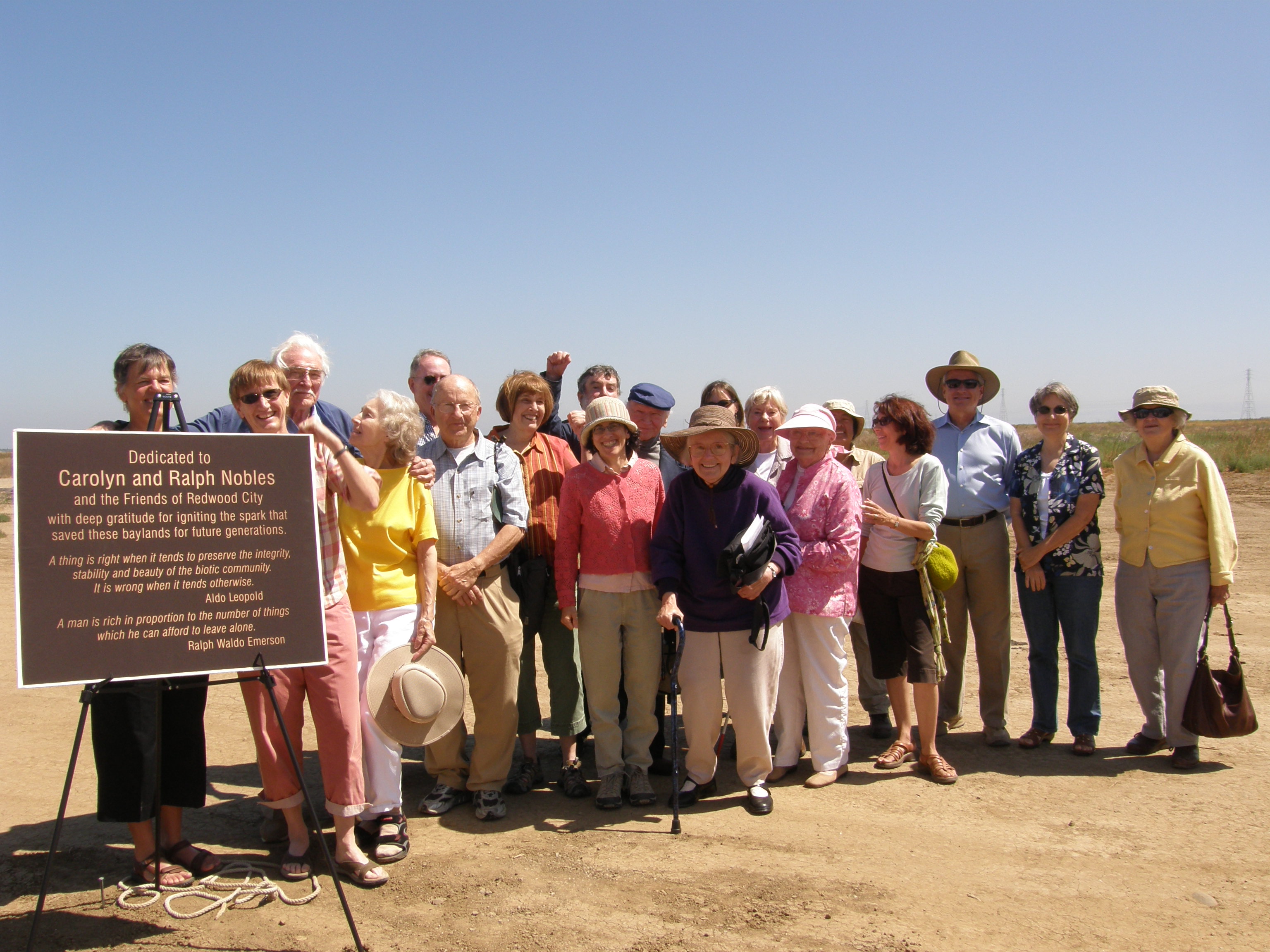 Sandra was followed by Florence LaRiviere who described how the Citizens Committee to Complete the Refuge came into being. At a small group meeting in her house in 1985, attendee Rick Epstein said, "Those people in Redwood City stopped that development on Bair Island, but the owner could come back at any time with a new development plan."  So, he added,   "Why don't we go back to Congressman Edwards and get that land into the Refuge?"  "While we're at it," he said, "let's get all the wetlands we have left into the Refuge."

What happened next was a full-bore campaign by the committee members with the help of Mr. Edwards’s political skill. The refuge that we persuaded congress to establish in 1972 was doubled in size in 1988.   So...there was a place in the refuge for Bair Island.  That is, IF it could be acquired!

Next it was Arthur Feinstein's turn who was with Golden Gate Audubon at the time. He related the story of how he told the Bay Area Audubon council members of the exciting possibility - that the 1,700-acre Bair Island could be an important addition to the refuge, IF the owner, Kumagai Gumi, a Japanese industrialist, would sell.
The council agreed, and with inspiration, chose Bill Rukeyser, a Sacramento consultant, to plan the campaign to acquire the island. (Fortunately, the council had just come into monies from a local oil spill settlement.)  Rukeyser in turn spoke with Chalmers Johnson, an expert in Trans-Pacific commercial affairs.  Together, they came up with the startling idea of running a full-page ad in the New York Times, (West  Coast and Japan edition)  featuring a photograph of the owner, Mr. Taichiro Kumagai, President of Kumagai Gumi.  The ad appeared on Oct. 8, 1996, appealing to Mr. Kumagai to please let the island go back to the Bay.  About three weeks after the newspaper ran the story, the owner's representative called the Fish and Wildlife Service, and said, "Let's talk."

Walter Moore came to the dais and presented the last act of this drama.  He described how the Peninsula Open Space Trust (POST) borrowed $15 million and turned it over to Mr. Kumagai. Eventually POST successfully carried out a fund-raising campaign that brought a third of the needed monies from public donations, a third from local foundations, and the rest from federal sources. Thereupon ownership was transferred to the Fish and Wildlife Service!

Congresswoman Anna Eshoo, represented by her staff member, Christine Padilla, sent her congratulations to all who had worked so hard to preserve  Bair Island.
Finally, the best part of the ceremony came when Mendel Stewart surprised Ralph with a plaque that acknowledges the tremendous contribution he and Carolyn, and the Friends of Redwood City have made by saving these lands forever. Ralph Nobles graciously expressed his thanks for the honor, read the names of each of the local residents who had joined together that day 29 years before to bring about a miracle.  He had a bit of advice to the crowd, "Carry on!"